According to Parks and Recreation and Brooklyn Nine Nine executive producer Michael Schur, his boss Greg Daniels had a rule at The Office: at the end of every episode, we should know one new thing about the world of the show. Cheers was probably where Daniels got that idea, even if the show didn’t purposely do this for all 275 episodes. A huge part of building the mythology of a Boston where a Cheers exists, with its Hungry Heifers (RIP) and Melvilles, are the recurring barflies of the bar, the lucky few extras that were given lines while ensuring that we didn’t worry that much if Sam and Rebecca were keeping a profit. Over time, even those guys get a little backstory thrown their way, but none of them had really started to show signs of sticking his giant head into the weekly shenanigans of the (not at all) cool kids than Paul Krapence.

Paul Krapence was played by Paul Willson, who had to take four years and seasons off from Cheers to play Leonard Smith, the annoying president of Garry Shandling’s condo on the excellent It’s Garry Shandling’s Show (and would later play one of The Bobs in Office Space.) When he returned, Paul’s role increased after his critically acclaimed, pay cable vacation, which immediately wrecked havoc on continuity. Either that or he’s a very complex man. Sam said that Paul “has a positive outlook on life” in one episode, but not too long later Paul lamented to Woody that it isn’t fair that he doesn’t get the love Norm does, since he hates his wife as much as Mr. Peterson. Apparently he doesn’t respect his wife either, because not too long after *that* he was dating a “chubby chaser.” That last story was to make Sam feel inferior, but really Cheers could have cast any corpulent man, or had the woman lust after Norm (which she ended up doing anyway) instead of allow for Paul to come off as a royal jackass to anyone paying attention. But the toll booth attendant (Carla confirmed the extreme likelihood that is Paul’s occupation by the excessive quarter tips from the man) isn’t alone in coloring in the beer soaked universe: there was everybody’s favorite, Al, best known as “Sinatra guy,” who passed away during filming of season nine.

The show cast Rhea Perlman’s father to play the new old man, Phil, who took a lot of abuse from his real life daughter for asking the right questions at always the wrong time. Tom was so terrible at taking his bar exams that Cliff regularly openly mocked him and nobody did anything about it, but ended up passing on the umpteenth try just in time to act as Sam’s counsel in the classic Sam/Diane marriage proposal episode. Harry the Hat seemed destined to get more and more work on the show until Harry Anderson got his own starring gig on Night Court. There was Paul the loud guy, who left hopefully because of the volume of his voice. Steve, the curly-haired guy who could have been Mario Lopez’s double on Saved by the Bell still hangs around to occasionally make an antagonizing comment. There’s poor Pete, who we found out recently is a surveillance expert because his wife cheats on him, and Barry, the effeminate gay man, who Norm will sometimes defer to settle an argument – Norm has come a very long way from threatening to leave Cheers if Sam didn’t get rid of the homosexuals in the bar back in the first season. Not only do these auxiliary fellows give Cheers the real feel of an actual bar, they actually measure the passage of time and the evolution of the main characters. 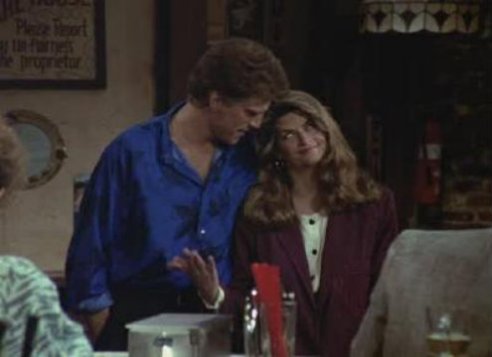 The two characters that get to bask in the spotlight held by the aforementioned little people, Sam Malone and Rebecca Howe, both tend to take one step forward and two steps back when it comes to maturity, but season nine finally ended Sam’s obsession with attempting to get Rebecca to sleep with him. Fortunately not much time was spent on Rebecca hearing that the huge build-up and his many years of experience led to Sam not finding the experience as mind-blowing as she did and growing resentful and resorting back to useless bickering confused as sexual tension. Instead Mayday Malone recognized Rebecca as an actual female friend, leading to some episodes actually concluding with a Sam and Rebecca conversation, which is what the writers would do in the past with Sam and Diane if all else failed or there wasn’t enough to the A story. Sam’s focus was mostly on business, dealing with managing a bar in the technological age of fax machines and actual honest to goodness computers – and then hiring Rebecca to return to her old position. Melville’s new owner, the seemingly upstanding and uptight John Allen Hill, provided an arch nemesis for Sam to focus his energies on, which initially led to a kind of scary coda of an episode that found Ted Danson playing Sam as batshit crazy, ultimately failing to try to burn down the upstairs restaurant’s placemat, not that far off from the classic Mr. Show sketch when David Cross repeatedly tried to destroy the American flag.

Rebecca meanwhile initially resorted to leaving Cheers to work as Miss Miracle Buff at a car show, something New Girl shamelessly ripped off with Jess last season (or it was a “lovely, respectful homage”). Her relationship with Robin Colcord remained intact while he served in a humorously luxurious minimum security prison. For February sweeps, there was a wedding ceremony for the recently released Robin and Rebecca, but that of course didn’t work out (it feels like the only wedding on the show that was able to reach its conclusion was Carla and Eddie’s), and Robin was written off the show. The second half of the season gave Rebecca the clarity to see that Cheers was her home, and began to threaten Sam that she wanted to buy the bar off of him. The two eventually decided to buy the bathrooms and the back room together off of John “I Suck” Hill, officially making them partners. Without a Sam constantly attempting to get her into bed, or a wealthy businessman to swoon over and/or date, Rebecca suddenly seemed a bit irrelevant, as awful as that might sound.

That problem was solved over the final two episodes of the year. A night of babysitting Frasier and Lilith’s son Frederick led Sam to realize he wanted kids. By the end of the finale, Sam convinced Rebecca to join him so they can share a baby. Rebecca’s excitement immediately signaled that it was probably an awful idea, more of a project for Rebecca to tackle than a legitimate life decision. It did however give the writers something to work with for season ten, and once again returned Sam into someone who can acknowledge his own mortality. Even if he backslides next season like he had in the past, it can peskily enough be written off as “realistic.” Time though is running out in the series for him to do such a thing. 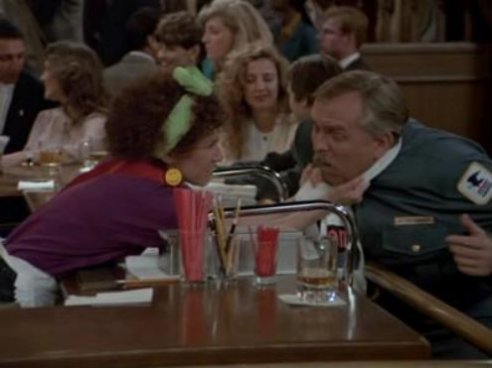 The seasons of Cheers have a pattern to them lately: the premiere tidies up the previous season’s finale cliffhanger and sets up the stories for the current season; late in the middle of the season, when it’s February, there are resolutions to some of those stories; the finale concludes the rest and sets up something brand new, sometimes as an indirect consequence stemming from those resolutions. It doesn’t matter if you start to see the pattern of the plot in your brain (which will happen if you watch in binges on Netflix or use the ShowBox APK to do the same on your phone) as long as those stories are told within the rules of credulity we consciously allow a television show to live by. As a long running comedy and tv show, some things pop up way too often and really push it: there has been an absurd number of aborted weddings; one season 9 episode concluded with Sam having to spend the night sleeping against the wall at carla’s mother’s house, and Sam not only doesn’t fire Carla immediately but never mentions it again ; whenever Sam or someone defends Cheers is a classy place it always being proven wrong immediately; the same joke about the bar denizens talking smack about Henri, Woody’s girlfriend Kelly’s smarmy French friend and then warmly wishing him hello was told multiple times. But a comedy in its ninth season can also surprise you with its own memory, sacrificing a possibly bigger laugh in the process. While discussing Rebecca’s upcoming wedding, Lilith made a joke referencing Sy and Eddie Kupperman. We have never met the Kuppermans but had heard their names once before, in season seven. With little time to do otherwise, Rebecca obtained napkins that read “Matzeltov Sy and Effie Kupperman” for Carla’s bridal shower. Lilith’s line got a modest laugh from the studio audience, mostly from people not realizing why exactly they should be laughing. Add to that the acknowledgement of Coach’s existence and the references to Diane (a little too often actually, it becomes apparent that too many shows in the nineties copied the aborted wedding tropes and not enough of the mythology building and easter eggs. It is something that fortunately the most critically and sometimes commercially successful showrunners of the present day have fortunately intuited.