“The Foul Weather Girl” isn’t the worst episode of Dick Van Dyke’s second season, but it’s definitely up there. There’s just a sense of exhaustion underneath pretty much every scene, as though this was maybe a slight breather for Carl Reiner and company in the midst of a thirty-two episode season. There’s a lot here that doesn’t play well at all to modern eyes, but even the offensive stuff is characterized as much by a general feeling of tiredness as it is by any ideological issues. Were this the show’s average level of quality, that would be another story (this was the exact problem the first couple of years of The Mary Tyler Moore Show had), but in the grand picture of a generally very strong season, a blandly average episode like this isn’t that big of a deal. That said . . . it is pretty darn bland. And not even really average, when you get right down to it.

It’s not that jealousy within a marriage is necessarily a bad idea to build an episode around. The show has done successful episodes about it before, and will again. But this one is just absolutely tepid from the very first scene. At their best, Dick Van Dyke episodes unfold as a dizzying and delightful series of escalating events: the product of careful sequencing in the script and note-perfect staging in front of the camera. At their worst, they unfold like the “The Foul Weather Girl’s” telegraphed attempt at eliciting its first really big laugh: Rob mistaking old school friend Jane Leighton (Joan O’Brien) for Laura and kissing her. The big comedy lecture Rob gives to the kids in season one’s “Father of the Week” comes into play here in analyzing why this moment just doesn’t work as intended: lack of surprise. True, anticipation can add to the humor, but there still needs to be some sort of new twist to a scene like this. And there really isn’t here. There’s just the kiss, followed by Laura walking in: both moments it’s possible to see coming from a mile away, and which unfold exactly as expected.

The same could be said of most of “The Foul Weather Girl”. The episode isn’t wholly devoid of joys, but they are fairly limited: mostly to small individual moments inside larger scenes that mostly don’t succeed. The way Rob frequently coughs whenever he’s in a situation he finds uncomfortable is a really nice running character gag, so it’s always great to see it recur under a new set of circumstances. On the whole,  though, both the concept and execution of the story fall flat. O’Brien is fairly good as Jane, and delivers another of the few highlights here with her excellent rendition of “Just in Time”. But the character herself is very underwritten, and in a way that’s pretty offensive to boot. She’s there almost entirely to fuel the conflict between Laura and Rob, and to be the object of Buddy and (even more disturbingly) Richie’s objectifying remarks. And then the show throws her under the bus by portraying her as an ungrateful, conniving schemer who’s using her looks to advance her career, as she begins to ingratiate herself with Mel once she’s gotten all the assistance she needs from Rob. 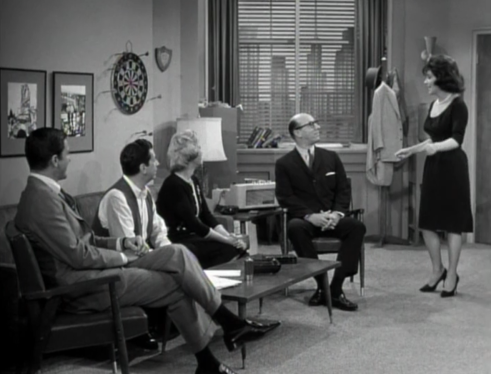 I suppose a simple thank you to Rob would have been appreciated, but the idea that she should somehow be eternally indebted to a man who took her under his wing and helped her is asinine patriarchal nonsense. There’s definitely a fair bit of slut-shaming here too, particularly on the part of Laura, who criticizes her for her flirting with married men as a way of climbing the career ladder. How about criticizing the men, Laura? Or how about the fact that they’re the ones who hold all the keys to whether someone like Jane Leighton succeeds or fails? Nope. Instead, “The Foul Weather Girl” elects to take the route that is both sexist and lazy, turning this into a tale of the evils of unchecked female sexuality. Ugh.

But honestly, all of this isn’t even the main reason why this episode fails. It fails primarily because the jokes themselves all follow roughly the same trajectory as that initial case of mistaken identity: obvious set-up leads to predictable punchline. Even usually reliable sources of laughs like Buddy and Mel’s repartee fail to get laughs, going for a one-liner about bringing coffee that just sits there, dead on arrival. You know things are pretty dire when a half-clever reveal about pepper and chocolate pudding is the best, most surprising gag in the episode, but such is sadly the case with “The Foul Weather Girl”. If one were to outline this episode’s main points, it would probably look relatively decent (aside from the terrible gender politics, of course). But alas, someone forgot to bring the jokes to go along with the scenario, and both prove almost entirely unsuccessful because of it.

In Two Weeks: “Will You Two Be My Wife?